Skip to content
Why representation is important to our Network

Our national Network plays a critical role in putting technology to work to help government better serve communities across the country — thanks in large part to the incredible reach of the 80 Code for America Brigades across the United States. Code for America’s mission is to make government work by the people, for the people, in the digital age—we as the Code for America Network Team and National Advisory Council believe that if we are going to make government work for everyone, we need to ensure that a diverse set of voices are leading the work of our Brigades.

We are continuously striving to ensure that diversity and inclusion principles are effectively incorporated into our work, and to push the envelope in these areas in the broader tech space. With that in mind, we embarked on our first-ever Brigade census at the beginning of this year to gather demographic data that establishes a benchmark for the current diversity of the Brigade Network. 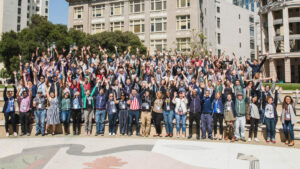 The census report was created with the significant contributions of Sharon Melmon, who served as the Senior Data Analyst for the 2019 Brigade Network Census.

The racial diversity of our Brigade Network is roughly on par with that of the population of the country as a whole.

More than a quarter of our Network does not work in tech.

More than a third of our Network is over 40 years old.

Where we currently stand

Many Brigade members fall in the 30-39 year old age range. But we also have a large representation of folks under 30 years old, and over ⅓ of our Network is over 40 years old.

The racial diversity of our Brigade Network is roughly on par with that of the population of the country as a whole.

The Network heavily skews towards a higher income range, with almost 60% of the Network reporting income of over $75,000.

As we strive to grow the diversity and representation in our Network, we keep in mind that the work that we do often aims to address inequities caused by unjust systems. In order to do this work effectively, we must ensure that the voices of those who have been most marginalized in our society are lifted up, and that they are a core part of the solutions we propose and create.

While our Network currently reflects U.S. population percentages in terms of White and Non-White populations, we’d like to see an increase of our participants that identify as people of color —particularly our Black/African-American and Hispanic/Latinx populations. Given that Code for America’s work is focused on issues that disproportionately affect racial minorities in our communities, we believe our membership should exceed the national average in our representation.

While we understand that more than two thirds of our Network self-identify as working in tech, and that technical roles in the United States often pay disproportionately higher than non-technical roles, we are concerned that the voices in our Network are overly composed of people with economic privilege (43% earns over $100,000 per year). We would like to see greater diversity in the income of our Network, particularly because the work we do often disproportionately affects people with lower incomes.

Reflecting on the information we’ve gathered, we’re glad to have embarked on the process of gaining information about our Network so we can make better and more intentional decisions in the work that we do. We are also happy that we are able to provide Brigade leaders with a resource to learn more about who is showing up in their communities, and also identifying gaps where Brigade leaders can focus on intentional recruitment.

From here, the Network will work on strategies to increase representation in the three areas identified above (Race, Gender, and Income). This will be an inclusive process that is co-created with Brigade members and leaders. Steps of this process will include: